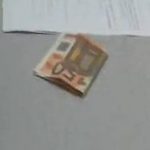 Border guards of the separate checkpoint “Kyiv” at the Boryspil Airport recorded another attempt of giving an unlawful monetary reward. Syrian citizen, YOB 1970, arrived by the flight “Dubai-Kiev”. During the control the man was rejected in crossing the state border of Ukraine. The foreigner proposed a bribe in the amount of 50 euro in order “to solve the problem” for him to pass the border. The person was warned about responsibility for giving unlawful monetary rewards to the officials. This case of bribe offering was reported to the officers of the National Police.