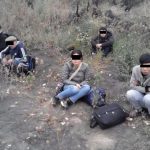 Four illegal migrants from Vietnam and their smuggler were apprehended 20 m before the border line by the border guards of BD “Vesele”. The group of illegal migrants was revealed in the settlement of Borysivka. The citizens, 1976, 1990 and two of 1996 YOB, as well as the smuggler, the citizen of Russian Federation, were called to administrative responsibility in accordance with the Article 204-1 of the Code of Ukraine as for administrative infringment. In the course of filtration activities, the Russian reported that he planned to transport to Ukraine 150 more citizens of Vietnam by small groups. The Russian citizen committed a criminal offence as to Article 332 of CCU (Illegal transportation of persons through the state border of Ukraine). They further destiny will be determined by the court.