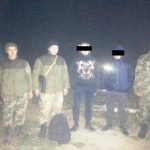 While patrolling the border detail of “Shegeni” detained two foreigners attempting to cross the border in illegal way and get to the neighboring Poland. Detainees were the citizens of Romania, YOB 1992 and 1993. As it was established by the law enforcers, the boys planned to get to the Western Europe aiming to be employed. They made their illegal route by themselves. A decision on attempt of the illegal cross of the Ukrainian state border will be made by the court. In accordance with the Part 2 Article 204-1 of AIC administrative responsibility is stipulated in the form of the fine for the sum of 200-500  non-taxable minimum incomes of the citizens (up to 8500 UAH).