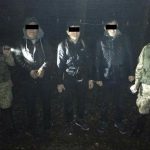 The staff of Mostytskyi and Chop detachments detained 5 illegal migrants from Mongolia and Algeria in the frames of special operation “Border-2017”. District inspector of BD “Krakovets” received information from the local resident of one of the border villages about the motion of some persons towards the neighboring country. The law enforcers started to the place immediately and in some kilometers there were two citizens of Algeria detained. As it was established soon, detainees of 1988 YOB arrived to Ukraine legally by plane, however, aimed to continue their trip to Europe in unlawful way.

In addition, the border guards of BD “Uzhhorod” revealed three foreign travelers 350 m before the border. As it was established soon, detained persons were the citizens of Mongolia travelling to Slovakia without any documents.

Protocols on administrative violation were prepared under the Part 2 Article 204-1 of AICU as to the citizens of Mongolia and Algeria, who attempted to cross illegally the state border of Ukraine. The decision on the case will be made by the court.