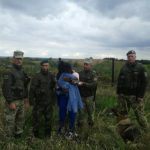 Border guards of BS “Shegeni”, at Ukrainian-Polish border, detained a citizen of Congo, who together with her three-month baby travelled to the neighboring Polish. When expecting the locality close the check point “Shegeni”, border detail noticed an unknown woman approaching the border on foot. It was established that the traveler attempted to avoid the check point and get illegally to the neighboring Poland together with her three-month child. The law enforcers took the mother and child immediately to the subdivision and provided her with heating and food. Emergency was called to the place due to the danger of baby’s undercooling. The border guards established that the detainee was a citizen of Congo Republic, 1991 YOB. She had expired passport and invalid Certificate for Temporary Residence in Ukraine. The woman reported that for certain time she resided in Odessa, when her Ukrainian stay permission expired she decided herself to get to Europe with her baby. Impressed the fact that woman did not have any warm clothes for the baby as well as some food. Upon medical examination, the woman and child were placed at Temporary Residence Facility for the Foreigners. Decision on the case as for attempt to cross illegally the state border of Ukraine will be made by the court.