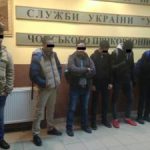 During the joint special operation “Border-2017”, the border guards of the Chop Detachment detained 12 illegal migrants from Yemen, Sudan and Vietnam. The officers of the Border Guard Department together with the officers of the Operative Search Department detained 6 citizens of Yemen and one Sudanese near the state border. According to the detainees’ words, they came from faraway borderlands in order to get the countries of the European Union in search of employment.

In addition, in the evening the border guards of Chop Detachment detained 5 more illegal migrants.

Having received information about the possible stay of a group of illegal migrants near the border, the law enforcers strengthened the protection measures and started to the village of Polyanska Guta, Perechyn district. Soon, a joint interdepartmental group of border guards, operatives from the Western Regional Department of the SBGS, officers of the National Police and the Security Service of Ukraine detained 5 Vietnamese citizens, including 4 women. They intended to get into the territory of Slovakia illegally.

All violators were delivered to the Temporary Detention Facility of the Chop Border Detachment in order to perform filtration measures and draft relevant procedural documents. The detainees will be brought to administrative responsibility under Part 2 of Art. 204-1 AICU “Violation or attempt to violate the state border”.