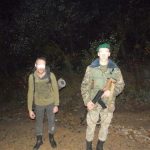 Three illegal migrants from Russia, Turkey and Armenia attempting to get illegally to the European Union were detained by the officers of the State Border Guard Service in the frames of operation “Border-2017”. Thus, during patrolling the border guards of BD “Knyagynya”, Chop Detachment, revealed and detained an undocumented citizen of Russia 400 meters before the state border. The man traveled to the neighboring country.

Two more “happiness seekers” were disclosed by the border guards of Chop and Mostytskyi Detachment. They apprehended two citizens of Turkey and Armenia nearby the border on Slovakia and Poland. Aiming to clarify the circumstances and drawing up protocols on administrative infringement the foreigners were delivered to the departments of Border Guard service. Decision on the cases as to the attempt of illegal cross of the state border of Ukraine by the citizens will be made by the court.