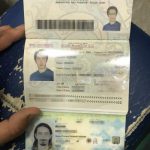 Border guards of Separate check point “Kyiv” detained two foreigners with partially forged passport documents. The citizens of Iran arrived to the International Airport Boryspil traveling to Vienna. When checking documents the inspector of Border Guard Service doubted in validity of provided documents, and handed the passports over for thorough examination. Upon verification it was established that both documents contained partial forgery, namely replacement of page with constituent data. The tourists used the foreign passports of the citizens of Finland and the Netherlands. They paid $ 900 and $ 3000 for the forgeries. Instead of the cherished Europe they will be returned to Colombo.

One more inventive foreigner aiming to stay in Ukraine was revealed by the border guards some hours later. The citizen of Pakistan made his way by the flight to Kyiv. However, he failed to undergo the border control. The border guards established that Ukrainian visa in his passport was partial forged. The man was rejected in entering Ukraine for a period of three years. Soon, the man will be returned by a back flight to Almaty.