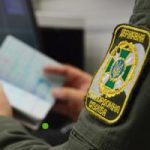 The border guards of the separate checkpoint “Kyiv” during the flight registration of passengers arrived to Kiev, detained the violator attempting to cross the state border of Ukraine with a false passport. He was detected during the registration of the flight “Istanbul-Kyiv”. Arriving to the checkpoint, a Turkish citizen presented a partially forged passport of a citizen of Bulgaria for check. After a thorough document examination the border guards found that the page with the constituent data was replaced in the passport. So far, the foreigner YOB 1991, is not allowed to cross the state border, in addition, he is forbidden to enter Ukraine for a term of three years.