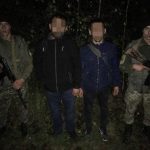 Border guards of Chop Detachment detained two citizens of Turkey close to the Ukrainian-Slovakian border. The men were getting through at night in direction to the engineer fences at the border. However, reaction groups, the cadets of National Academy were included into its composition, arrived to strengthen the border and detained the violators during their overcoming the barrage fence. During the verification process it was established that these person arrived to Ukraine in a determined order. Protocols were drawn up as to the detainees according to Part 2 Article 204-1 of AICU, the persons stay in the Temporary Detention Facility. The Transcarpathian Centre on Secondary Free Legal Aid was also informed on this point.