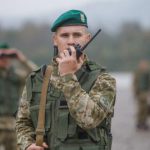 Lviv border guards apprehended two foreigners near the border. Local residents informed the officers of BD “Shegeni”, Mostytskyi Detachment, about appearance of foreigners in the border area. Reaction group checked provided information and soon detained two violators. They were the citizens of Moldova, who had some documents. So far, their intention to cross the border is established. Protocols were drawn up to the violators as to Art. 204-1 of AICU. The foreigners are detained for 3 days and stay in the Temporary Detention Facility. Currently, it is known that foreigners arrived to Ukraine in legal way via the check point in Odessa.