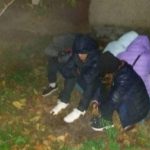 The special operation on detection and detention was carried out by the staff of Perechyn Police Department together with the Department for Combating Crimes Related to Human Trafficking, the Transcarpathian Police, representatives of the Migration Service.

Five illegal migrants were found in one of the houses in the village of Turya Polyana, Perechyn district. The owner of the house, where the foreigners were staying, was a local 42-year-old resident. His wife explained to law enforcers that she met a group of strangers near her house, regretted them and invited to her house in order to feed them. The Police and Migration Service found three women and two men aged 15 to 34 in the basement of the house. All of them were the citizens of a foreign state. A group of five people was transferred to the Chop Detachment. The staff of Perechyn Police Department together with the Department for Combating Crimes Related to Human Trafficking in Transcarpathian Region, determine the ways of the foreigners’ arrival to the territory of Ukraine and their further plans. In addition, the law enforcers investigate who among the citizens of our state could assist them in this. The investigative actions continue, the legal qualification of the event is under the determination.