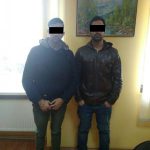 The staff of State Border Guard Service detained two citizens of the SEA (South-Eastern Autonomy) at Ukrainian border in Uzhgorod. Illegal migrants were detained by the border guards of Chop Detachment during the joint operation with the National Police. The district inspector of Uzhhorod Department, together with the police, revealed and stopped two men, the citizens of SEA. They tried to cross Ukrainian-Slovakian border illegally. Detainees did not have any documents, they introduced as the citizens of India and Pakistan. Currently, there are filtration and verification activities.

In addition, the border guards of the same detachment detained illegal migrants in the area of ​​responsibility of Uzhhorod Department. Four unknown men traveling towards the state border were found by the border guards together with the police. The detainees, according to their words – Indian citizens, were taken to the Border Guard Service aiming to draft procedural documents and legal qualification of the committed crime.