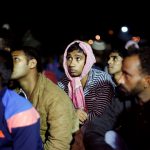 Slovakian Police detained 78 illegal migrants in the south of the country, who were transported in two trucks. The migrant were from Iraq, Iran and Syria. According to the preliminary information, the smugglers transported illegal migrants from Romania, and then they planned to deliver them to Germany. Police stopped two trucks in the Zhylina town being driven by Turkish driver. When performing the search the law enforcers found migrants, there were children among them. For the past time, it is the greatest case of illegal migration to Slovakia.