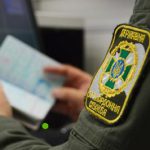 Citizen of Russia arrived by train to Ukrainian capital asked for refugee status in the check point “Kyiv-Railway”. The Russian woman applied to the staff of SBGS with an appeal to be granted refugee status. In the course of the interview the Russian woman informed that she was an oppositional activist and pursued in Russia for her political convictions. Currently, the woman was allowed to cross the state border and handed to the staff of SMS of Ukraine.