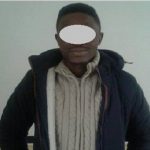 The military together with the National Police officers stopped a young man of African appearance at the railway station in Uzhgorod. He was a citizen of Ghana and studied in one of the regional universities, but could not confirm it. The only thing that the African showed to the border guards was a copy of the Temporary Residence Certificate, which was no longer valid. Since this stay of the foreigner within the  controlled border area contradicts to the requirements of the current legislation, the law enforcers detained the offender and took him to the Temporary Detention Facility of Chop Border Detachment.

Upon person’s identification and clarifying all the circumstances, the foreigner will be called to administrative responsibility and an issue regarding his further stay on the territory of Ukraine will be made.