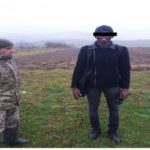 Border guards of Mostytskyi Detachment detained a migrant from Africa, who attempted to cross Ukrainian-Polish border on foot. The border guards received information from local residents about unknown person appearance in the direction to the state border. In the course of searching activities district inspector of Border Guard Service apprehended this man. It was 25-year-old citizen of Mali. The foreigner had his passport and expired Certificate for Temporary Residence in Ukraine. The man confirmed his illegal intentions to get to the neighboring Poland beyond the check points. The citizen was detained in administrative order; decision on the case of illegal cross of Ukrainian state border will be made by the court.