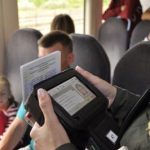 Thus, the documents of one of the passengers attracted the attention of the border guards during the registration for the train Lviv-Wroclaw at the Ukrainian-Polish border.  The man, born in 1975, presented the ID-card of French citizen. As the identification card testifying the foreign citizen does not ensure the right to cross the state border of Ukraine, the border guards rejected the man to enter the country. In addition, during the verification process the law enforcers established that mentioned citizen arrived to Ukraine some days ago by the flight from Istanbul; however, he crossed the border by the passport document of the Turkish citizen. Finally, the man confessed that he was not the citizen of Turkey; ID-card was bought in France for big money in order to get illegally to the countries of European Union. The identification card was not original as the competent bodies of France confirmed it not to be issued by them.

The man was detained in administrative order. By the Ukrainian court decision he will be called to administrative responsibility for his unlawful attempt to cross the state border of Ukraine.