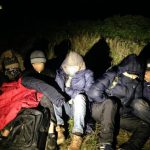 The staff of Vynohradiv Police Department took EU resident under custody, who was detained when smuggling five illegal migrants over the border. The inspectors established that one of the detainees apprehended nearby the Ukrainian-Hungarian border was the organizer of illegal migrants; smuggling. According to the inspector’s words the foreigner from the Berehovo town took five migrants and accompanied them to the check point, from where they had to cross the state border illegally by themselves. The smugglers from another side of the border, Hungary, had to transport them to Czech Republic. The men had to pay $2000 for this service.