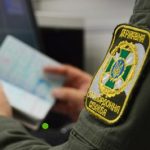 The staff of SBGS revealed two foreigners having forged document and someone’s passport.

The border guards of Separate checkpoint “Kyiv” during the registration of the passengers from the flight “Larnaca – Kiev” at the international airport Boryspil exposed a foreigner with forged documents. During the verification process the persons presented the Spanish ID-card, however, he was the citizen of Pakistan.  Currently, the offender is returned by a back flight.

And at the checkpoint “Krakovets” the border guards of Mostyskyi Detachment exposed the citizen of Turkey, who followed by the car “Volkswagen” to Poland with a foreign passport. Now, the offender is kept in the Temporary Detention Facility for his identification.