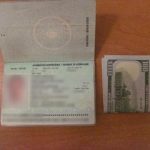 This morning, a database has operated as to one of the citizens in the railway control point “Konotop” during the implementation of border control of passengers from the train “Moscow-Odessa”. As it was established by the border guards, 47-year0-old foreigner was banned to enter Ukraine due to the Ukrainian legislation violation.

In the course of corresponding documents drawing up the man offered the border guards a bribe in the amount of $100 to get to the territory of Ukraine; afterwards he was rejected in it.

Currently, the documented offence provided under the Article 369 of Crime Code of Ukraine (Offer, promise or presenting unlawful benefit to an official person) was forwarded to the National Police.