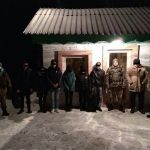 The State Border Guard Service continues applying systematic measures to combat illegal migration across the border. On the New Year Eve the border guards of Mostytskyi Detachment prevented the illegal cross of the state border of Ukraine in two cases by 8 illegal migrants.

Two Turkish citizens and 6 citizens of Vietnam, which probably intended to cross the border and to reach countries in Western Europe, was detained by employees of Department of a border service “Krakovets” and “Sianky”.

Thus, the district inspector of BD “Krakovets” bordering on Poland, received information from the inhabitants of the borderland about the appearance of the foreigners with non-Slavic appearance coming to the village by the car. Checking the message, inspector together with members of the public formation for the state border protection organized detail check of the vehicles on the specified road in the border line. Soon the above mentioned car was stopped. The car of Polish registration was driven by a citizen of Azerbaijan, who had no any documents, with the 2 passengers – Turkish citizens – having passport documents. The border guards detained the foreigners and draw up administrative materials concerning the attempt of the citizens of Turkey to cross the state border of Ukraine illegally. Protocol for border regime break was drawn up concerning the citizen of Azerbaijan; correspondingly the employees of National Police were informed on this point. In addition, the question concerning his possible involvement in organizing the illegal cross of the Turks across the border is under investigation.

And tonight, the border detail of BD “Syanky” stopped the car of Bulgarian registration on the road Lviv-Uzhhorod at the checkpoint on the border of Lviv and Transcarpathian regions. The car was driven by 37-year-old Ukrainian, a resident of Zhytomyr region, having the passengers sin the car, who were 6 citizens of Vietnam without any documents. Both the driver and passengers were detained, the actions of the Ukrainian was seen as an administrative offense under article 206-1 of the AICU “Illegal transportation of foreigners and stateless persons on the territory of Ukraine”. The citizens of Vietnam will be brought to justice according to article 204-1 of “Illegal cross or attempt to cross illegally the state border of Ukraine” (committed by a group of persons).

By these vehicles Ukrainian and Georgian, being documented, were carrying 1 citizen of Ukraine, 1 citizen of the Russian Federation and 10 citizens of Vietnam. Our country fellow and the Russian had documents, and the citizens of Vietnam, including 7 men and 3 women, did not have any passport documents. The persons were taken to border department. Verification activities continue.

The citizen of Turkey, who had twice tried to get to Slovakia illegally, was detained yesterday afternoon by the border guards of Chop Detachment. The offender was managed to stop due to the information obtained in a timely manner by the district inspector of the BD “Onokivtsi” from a local resident, who reported that a stranger of Asian appearance was noticed in the bus “Kamyanitsa-Uzhhorod”. The border guards checked the bus and found a 35-year-old Turk.

As it turned out, a month ago, the border guards detained this citizen for his attempt to break the border near the village of Huta. He was then issued a decision on forced return, under which the offender was obliged to leave the territory of Ukraine. However, the foreigner failed to keep these requirements; he exceeded the permitted period of stay on the territory of Ukraine and tried to cross the Ukrainian-Slovak border again.

He was taken to the border department for carrying out filtration measures and preparation of the relevant procedural documents. After clarification of all circumstances he will be brought to administrative responsibility under part 2 of article 204-1 of the AICU “Illegal cross or attempt to cross illegally the state border of Ukraine”.