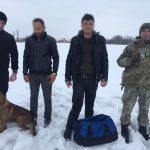 Illegal migrants are resorting to new tricks to get to EU countries. This time the offenders made their way to Poland along the railway track.

The border guards detained two citizens of Turkey, who bypassing the checkpoint “Mostyska-railway station” on foot, traveled to Europe. Two easily dressed travelers with a hand baggage followed through the snow-covered road near the railroad were noticed by the border guard. However, they failed to reach the border as they were met immediately by the response team of the border guards. The law enforcers found out that Turks, 1990 and 1996 years of birth, arrived to Ukraine legally by air service, the route was planned in the Internet and subsequently they went to the border by public transport. As always, they went to Poland in search of work.

The decision on their attempt to cross illegally the state border of Ukraine will be made by the court. Then, an issue will be also considered as to sending them back to the country of origin.

And in Transcarpathia the border guards of BD “Velykyi Bereznyi”, Chop Detachment, arrested another offender trying to get to EU countries. The man introducing himself as a Moldavian citizen was stopped by the border guards after the special signal device worked out. He left 100 meters to reach Slovakia.