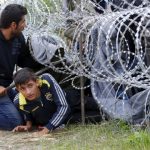 Within two weeks of operation “Migrant” in Vinnytsya region Police detained 28 persons illegally staying on the territory of the country.

“The Police checked public places, places with large concentrations of people – stations, markets, shops, educational institutions, hostels, hotels. Out of 28 identified illegal migrants by law enforcement agents: 26 decisions were made on their forced return to the country of origin, 1 – on forced expulsion”, – it was stated in the message.

Operation “Migrant” in Vinnytsya has been started on February 5. Fifteen days took its preparatory stage, and from February 21 Police together with the staff of Migration and Border Guard Services began to implement the activities. The purpose of preventive testing is to monitor the implementation of the legislation in the migration sphere, detect illegal stay of the foreigners or stateless persons on the territory of the region as well as prevent other offenses.