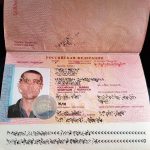 The border guards of Ismail Detachment together with the staff of National Police and Migration Service keep performing preventive actions on the operation “Migrant”, which focuses on counteraction to the violation of the stay rules by the foreigners in Ukraine. Thus, according to the information of operative subdivisions of the Southern Regional Department, the border guards revealed a foreigner with the passport being already expired in 2009 in the village of Lymanske, Odessa region. It was 55-year-old citizen of Russian Federation. The man having no any important reasons did not applied to the appropriate institutions in order to change the passport document. For the violation of the stay rules in Ukraine he called to administrative responsibility.

Since the beginning of the operation “Migrant” the border guards of Ismail Detachment together with the staff of National Police and Migration Service revealed 11 foreigners, who broke of stay rules within the territory of Ukraine. They were 2 citizens of the Russian Federation, 7 citizen of the Republic of Moldova, 1 – person from Belorussia and 1 from Uzbekistan. All persons were made responsible. Three foreigners were deported forcedly to their countries.