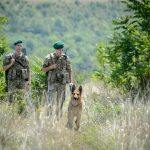 Information about the movement of unknown persons in the border area was received by the officers last night from a local resident. The  additional outfits were immediately sent to search the offenders, one of which was found on the outskirts of the village of Strychava, Velykyi Bereznyi district. The two men moved towards the state border when they were stopped by the guards of the Chop Detachment. The detained citizens of Turkey admitted that they intended to get into the EU bypassing checkpoints with the aim of improving living conditions.

Currently, the foreigners are delivered to the border subdivision. The protocols on the detection the signs of an administrative offense under Part 2 Article 204-1 of AICU “Illegal cross or attempt of illegal state border cross”.