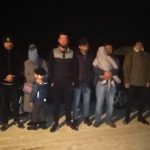 The border patrol stopped the car “Nissan” of Lithuanian registration for inspection near the city of Belz, Lviv region, near the border on Poland. There were a citizen of Uzbekistan, 7 foreigners – one woman and two children and driver. The border guards found out that they were Chinese citizens, arrived to Ukraine under the established procedure through one of the checkpoints by air communication. Besides, it was established that two citizens of China at the beginning of December were already detained by the border guards of the same Department.

The foreigners were taken to the Temporary Detention Center. The protocols on administrative detention are drawn up, the circumstances of the offense are established.