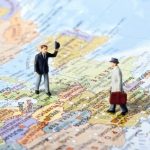 The politics commenting on the issues of migration, mainly remember it in a negative context, it is written in the blog on the “New time” by the Deputy Executive Director of the Center for Economic Strategy Dmitryi Yablonovskii. But is it migration, especially labour one, only a “betrayal” and how to fight this “betrayal”?

The increase in labor mobility contributes to global economic development. This occurs because economic resources are used through migration more productively. However, for donor countries the effect of migration is not always positive. The labor force is one of the production factors. Its lack in a result of migration may inhibit the development of the economy. If the highly educated and highly skilled workers leave the country, it restrains technological development and implementation of innovations limiting a qualitative change in the structure of the economy.

According to the researches of the Center for Economic Strategy “How many Ukrainians have gone abroad and what the country should do about it”, migration in Ukraine has primarily a short-term, pendular character. According to our expert estimates, up to 4 million Ukrainians may be involved in labour migration, while at the same time outside of the country this figure may be up to 2.6-2.7 million Ukrainians.

The negative effects of short-term labour migration can involve: a decrease in consumer demand, reduce of the tax revenues and social contributions, wage inflation, social stratification of the society. But the positive effect includes – reduction in unemployment and poverty, the inflow of remittances, greater incentives to invest in education.

Migrants bring or transfer to Ukraine funds earned abroad annually, which comprises 7.6-8.4% of GDP. This amount exceeds the entire volume of foreign direct investment in our country. For example, in 2015-2017 years, this money helped to keep the surplus of the current account balance close to zero.

Among the negative consequences of migration there is a labor shortage, which becomes especially noticeable with the release out of the economy crisis. The labor migrants leave the country for higher wages. To compete with wages of the foreign employers and not to lose competitiveness the Ukrainian enterprises are forced to invest in increasing productivity.

The Ukrainians working abroad, as a rule, do not pay taxes on their income, but often receive subsidies and social benefits from the state. In 2015-2016 the transfers from the state accounted for 27% of total resources of the households, more than 40% of Ukrainian families receive subsidies. It can be assumed that part of these funds was received by the Ukrainians, who could not qualify for them, if the declared income earned abroad.

In the absence of reliable data it is difficult to accurately estimate the net impact of migration on the country’s economy. In our opinion, it is positive during the crisis, but can become a constraining factor for economic development in the long term perspective.

European experience shows: the countries just joining the EU have experienced large-scale emigration wave to the more developed EU countries. For example, the population of Latvia in the years of 2000 – 2017 was reduced by a quarter. According to the International Monetary Fund in different Eastern European countries the emigration “has cut” 0.6-0.9 GDP from the annual GDP growth in 1999-2014.

In order to avoid the negative impact of the migration on economic growth in the long term perspective, Ukraine needs investments to improve productivity. This will improve real wages within the country and make migration to be a less attractive alternative.