During the monitoring of the border area, 70 meters before the state border, the soldiers of the BU “Rozdilna” found a foreigner who secretly intended to get into our country.

Two violators of the legislation of Ukraine were detained by the border guards detained at the checkpoint “Mogilev-Podolsky-auto” and “Starokozache”.

Currently, the citizens of Moldova is banned to enter Ukraine from 5 to 10 years. In addition, one of the offenders repeatedly committing an intentional crime was fined 3.4 thousand UAH. In all cases, the persons have been forcibly expelled to their countries of origin.

Last night, during the border control of the bus passengers, the soldiers of the Lviv Detachment found a foreigner who presented someone’s document of a citizen of India for the passport control. During the conversation, the traveller said that he was Indian. However, his personality will be identified by the officers of the National Police, which transferred the offender and the informed about the signs of the criminal offense under Article 357 of the Crime Code of Ukraine.

It was succeeded to detain the offenders due to expeditious exchange of information on identification of a group of persons by a border detail of BU “Vylok”, who moved towards the water channel “Botar” through which the Ukrainian-Hungarian border passes.

As a result of further joint activities, the Hungarian border guards, from their part, were able to detain immediately four people without documents, who called themselves Turkish citizens. Another Turkish citizen, accompanied by the Ukrainian, was detained by the border guards of the Mukachevo Detachment according to the information received from the operational staff of the Western Regional Department. The foreigner was in the car driven by the citizen of Ukraine.

Information about the detection and apprehension of illegal immigrants, as well as further possible attempt to breach the border on other directions was distributed along the neighboring border units of Mukachevo Detachment. Checking this information, the response team of the BU “Luzhanka”  together with the operational staff of the state border service soon detained two more Turkish citizens who planned to illegally enter Hungary.

Currently, the detainees undergo filtration actions, all circumstances of the crime and a circle of persons involved in the organization of illegal transportation of citizens through border are established.

Last night, a resident of the village Tykha reported the border guards of the BU “Smilnytsya” about the unknown persons to move in the direction of state border. Wasting no time, the border guards went to the place of possible offenders’ presence. During search operations the troops of the Mostyska Detachment detained two foreigners. The citizens of India, men born in 1988 and 1995, intended to cross illegally the state border beyond the checkpoints.

And the border guards of the BU “Luzhanka”, Mukachevo Detachment during implementation of operational information, detained two more illegal immigrants from Turkey at the border, who made their way to the neighboring country.

All illegal migrants were taken to the border units to clarify the circumstances of their offences and prepare administrative documents. The filtration events are continued. 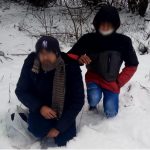 The officers not only prevented the unlawful actions of illegal immigrants, but also saved their lives. Frozen and exhausted foreigners were found in the highlands when they tried to get to Slovakia.

Despite the weather conditions and almost a meter layer of snow in the mountains, the smugglers sent illegal migrants, who are accustomed to a completely different climate, to make their own way through the forest to the state border. Note that the desire of illegal dealers to quickly and illegally earn money has repeatedly led to irreparable consequences, in particular to the death of the “travelers”.

The detainees were the citizens of Egypt and Morocco. The border guards immediately provided first aid to the foreigners. After improving their health state, the offenders will be interviewed to establish all the circumstances of their illegal travel. Also actions proceed on establishment of persons involved in the revealed offense. In addition, the foreigners will be held accountable for their attempt to illegally cross the state border of Ukraine. 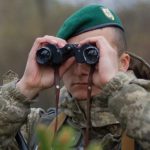 Last night, during the locality monitoring, the officers of the BU “Belyaiivka” and “Troitske” found two citizens of Moldova and Tajikistan, who planned to bypass the checkpoints to get to the territory of Ukraine.

The protocols were drawn up as for administrative offense of the violators under Part 1 Article 204 of AICU “Illegal cross or attempt of illegal state border cross”. 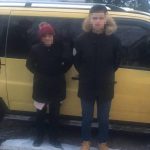 Information about possible attempt to violate the border was provided by the Operational Unit of the Western Regional Department of the State Border Guard Service.

In the morning at the checkpoint” Luzhanka”, during the registration of the vehicle” Mercedes” being driven by 32-year-old Ukrainian, the border guards found that two passengers of the car provided foreign passports of citizens of Ukraine for verification. In the course of further activities it was revealed that 32-year-old woman and 19-year-old man from Iraq decided to cross illegally the Ukrainian-Hungarian border. However, the offenders had their passports of the citizens of Iraq.

The foreigners and driver of the vehicle will be held accountable. The further destiny of the travelers and assessment of their actions will be determined by the court. 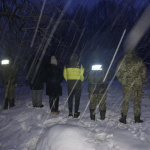 Three more travelers were apprehended by the border guards of the same Detachment “Smilnytsya” in the suburb of the  Halivka village. The brave persons, who ventured through the snow to overcome the Ukrainian-Polish border, were soon stopped. They were 3 citizens of Mongolia – 2 men and 1 woman.

The administrative and procedural documents were drawn up under the Article 204-1 Part 2 of the AICU and detained up to 3 days to ascertain the circumstances of the offense.

Also, it will be noted that all detainees arrived to Ukraine in the established order. The circumstances of the offence are under establishment. 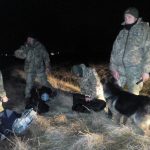 The response team of BU “Shehyni” during the information verification received from the operative units of the Western Regional Department detained three men 400 meters before the border on Poland. Further activities revealed that the detainees were the citizens of Sri Lanka.

Another attempt to violate the state border was not allowed by the border guards of the BU “Tysa”. The citizen of Hungary, which in summer was prohibited to enter Ukraine, tried to pass the checkpoint to get to our country and to check the vigilance of border guards.

In both cases, the offenders were taken to the border units and brought to justice. 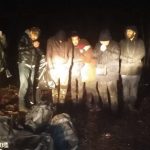 The trip to the EU ended unsuccessfully for 7 Turkish citizens over the past day. The border guards og Lviv Detachment prevented the border cross.

The officers of the BU “Pavlovychy” bordering on Poland received information about the appearance of an unknown persons in the forest on the outskirts of the village. The border guards were informed by the local residents. The response team, which immediately started to the place, detained seven Turkish citizens – five men and two women.

The border guards found out that the foreigners were  in the border area planing to get to the EU countries outside the checkpoint to avoid passing border control.